It has been an exciting few days of F1 testing despite the poor weather leading to delays and uncertainty. The weather has also meant that fans may have to wait until next week to see what the new cars are really capable of, but despite this there have still been some impressive performances. 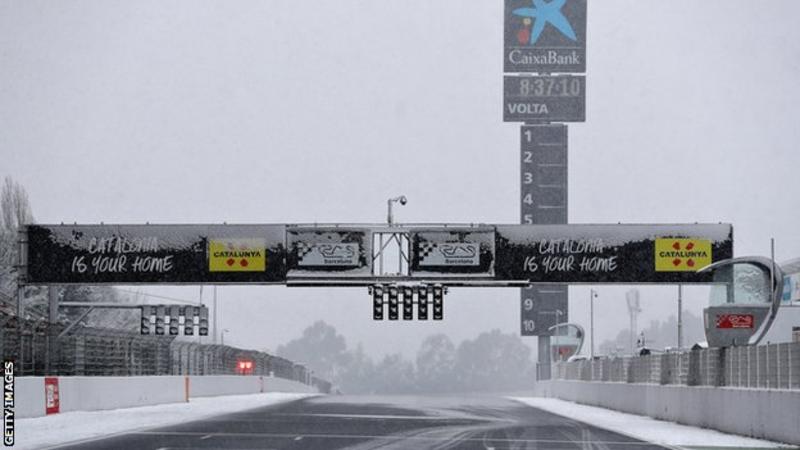 Daniel Ricciardo set the pace for Red Bull on day one but then on Tuesday Ferrari’s Sebastian Vette made use of Pirelli’s soft compound tyre to lower the benchmark time by 0.5s to 1:19.673 and he ended the second day at the top of the time sheets beating Mercedes Valtteri Bottas by 0.303s. Bottas managed to dip into the 1:19s in the afternoon session but he was using the slower medium tyre.

However, as mentioned, it is still hard to make comparisons, especially as the extremely cold weather means that teams were not able to start performance testing.

Speaking after day two Vettel said, “It’s cold. It’s very cold. So I think the most important thing if you look at the table we did nearly 100 laps. Considering that it was snowing also at the end of the day it’s OK. It’s very difficult to get the tyres to work and I think everybody is having the same issues. It’s only three or four degrees and the asphalt is 10 degrees so it’s very, very cold. Not the conditions that we normally run. I think the car is working, we didn’t have any problems reliability-wise.”

He added that while he does not know if the team has improved in terms of performance, he feels that everything has been very smooth and that it was a relief to “switch on the car and be able to run”.

The second day’s cold meant that there were just a few installation laps during the first hour. Pirelli’s tyres struggle to operate if they are not warmed to 90C and with air temperatures below zero and a track temperature of 2.2C there was little point in taking the risk of an accident in order to take to the circuit.

Just before lunch break the sun make an appearance and as the temperature headed towards 5C, it was decided to abandon the usual one-hour lunch break and allow the drivers to make the most of the sun and continue driving between 1pm and 2pm. The majority of teams made use of this and Mercedes, who were eager to maximise running in the dry and slightly warmer temperatures, decided to abandon its plan to swap drivers at lunch and kept Valtteri Bottas in the car for the remainder of the day. Because of this the reigning world champion, Lewis Hamilton, was unable to drive and completed just 25 laps in two days. It takes about an hour for the teams to set up the car for a different driver as they have to change the seat and pedals. Instead, it was decided not to waste any valuable track time, something that Hamilton seemed to agree with.

Afterwards Hamilton said, “With the weather conditions being up and down and the loss of track time we had yesterday, it made sense to keep Valtteri in the car this afternoon. Having run in the morning, he was comfortable in the car already and we would have lost about an hour of running time with the driver switch. With no real understanding of whether good weather was coming or not, I took the decision to sacrifice that time in order for the team to gain better understanding of the car by going through the run plan.”

Red Bull topped the timesheets on Monday but they completed just three laps on Tuesday morning due to a fuel leak in Max Verstappen’s car. However, the issue was fixed by the afternoon and he managed to complete a further 62 laps by the end of the day and set the fourth fastest time.

“We had a fuel leak and checked everything in the car because the track was in a very bad state anyway, so we didn’t really lose track time,” Vestappen explained. “And then afterwards we completed quite a bit of what we wanted to do. We tested a few things on the car and I was happy so it was a positive day.”

McLaren also suffered because of the weather and managed to complete just 37 laps throughout the day. The car was in the garage for most of the afternoon after the its engine cover showed signs of overheating around the exhaust. Eventually it transpired that a clip holding the exhaust in place become loose and this caused damage to parts of the wiring loom. It came after Fernando Alonso suffered from a wheel-nut failure on Monday and it means that the team has managed just 19 laps more than the same time last year when it was struggling with Honda reliability issues. In the end, Stoffel Vandoorne ended Tuesday’s session third fastest after managing 1:20.325 on the new Pirelli hyper-soft tyre, the softest and fastest available.

Here's hoping it was the first of many 🤞

Haas was also restricted and managed just 36 laps on Tuesday due to the bad weather and some bad luck with mechanical issues. Kevin Magnussen went through the gravel at Turn 4 and narrowly avoided a collision with the barrier. Afterwards he said that the conditions were close to impossible until some modifications were made to the car.

Speaking at the end of Tuesday Magnussen said, “I was going 22 seconds slower than the fastest car at that point, and we weren’t setting the car up for those conditions, so you need to allow heat from the brakes into the rims to have a chance of getting heat into the tyres in these conditions and we didn’t do that. So we were expecting to survive without cutting in the brake drums, but eventually we realised there was no chance, we needed to modify it to get some heat, and then it was fine. But that run was worse than being in the wet on slicks, it was worse than that! It was on an out lap and I couldn’t stay on track, so not ideal.”

In the end he made it back out for four laps before the end of the day after the damage was repaired.

Tuesday saw two red flags, one when Charles Leclerc beached his Sauber at Turn 4 in the early afternoon and the second when the track had to be cleaned of gravel dragged onto the circuit by Vettel going off at Turn 2. Leclerc went through the gravel a second time at Turn 4 later in the day but he managed to rally cross his way back on to the track. At the end of the day he had completed 81 laps and held the tenth fastest time.

Speaking after Day 1 Leclerc said, “First of all, it is great to be back racing after a long winter break. Overall, it was a very positive first day of testing for me. Although the weather conditions were not ideal, with low temperatures and even some snow in the afternoon, I was able to develop a better sense of what the car behaves like on track. We completed a good number of laps, completing aerodynamic and mechanical tests throughout the day. The C37 has potential, and I look forward to driving again on my second day of test 1.”

In other news from Tuesday, Carlos Sainz was the fifth fastest in the Renault after completing 65 laps. Nico Hulkenberg was due to drive in the afternoon, but the team made the same decision as Mercedes and chose to stay with one driver for the day.

Toro Rosso had another positive day with its new engine supplier Honda managing a total of 80 laps and claiming the sixth fastest time. There were concerns about reliability before the start of testing after McLaren’s problems with Honda for the last three years. However, so far there have been no real problems with the new STR13.

Rooster tails all the way down the straight. #F1Testing pic.twitter.com/czQEpXpS1f

Williams also managed a good day of testing with the car split between race driver Sergey Sirotkin and their reserve driver Robert Kubica. It was the first time that Kubica had taken the wheel of the new FW41 and he managed 47 laps with the seventh fastest time, finishing 0.327s ahead of Sirotkin in eighth.

On Wednesday morning snow hit the track in Barcelona and the start of the day was delayed. Lewis Hamilton spent the morning making a small snowman while in general teams are calling for the testing to be extended. However, this would require a rule change as only four days of consecutive testing is allowed pre-season. This means that all ten teams will have to agree to any changes and on Wednesday morning it was announced that the teams failed to reach a unanimous agreement.