Most of the time Real Madrid are amongst the top football clubs in the world, but at present everything seems to be going wrong for the reigning European Champions. The club has failed to find its usual consistency this season and have not put together a convincing performance since they took Roma apart in September.

Since the team defeated Liverpool to lift the UEFA cup last season, there have been a number of changes at Real Madrid, in both the squad and the backroom staff, and it seems that the team need more time to adjust.

The club not only lost its most influential coach, but also its biggest star player, and at the same time, the team is suffering from a number of injuries. There have been a few promising signs here and there as the players try to adapt to Lopetegui’s style of play, but they have a long way to go before they are back to full force.

Following their shock defeat to Levante over the weekend, we take a look at some of the issues that have been apparent in recent weeks.

Thanks for the warm welcome. Always feel at home here.

While the fans and the board may not admit it, the team is definitely missing Cristiano Ronaldo.

At first, it appeared that his departure might not be too disruptive; the team seemed to do well in preseason and at the beginning of the La Liga campaign. The team’s Spanish players were coming along well and it seemed that the sale of Ronaldo was perfectly timed. Ronaldo’s departure also gave youngsters like Asensio and Mariano space to flourish, and older players, such as Bale, the chance to consolidate their place on the team.

It was widely expected that with Ronaldo gone, other players would have more chances to score, and this certainly seemed to be the case. However, even their combined efforts are not enough to match Ronaldo’s goal scoring ability.

When Gareth Bale is at the top of his game and fit then he is an excellent player.  However, he has been injury prone over the last few seasons and has failed to stay fit for an entire season since his debut campaign with the team. While he is a quality player, he does not seem likely to start scoring 30 or more goals per season, as Ronaldo frequently does.

Furthermore, Ronaldo would often draw the focus of the opponent’s defenders and that way open up space for his teammates to score. The team didn’t even try to purchase a player that would take Ronaldo’s place, and this seems to have been a costly mistake. Real Madrid just do not seem to have any real attacking threat since Ronaldo left, and it took hardly any time for this to become apparent once the season had started.

The team are still creating plenty of chances, against Levante they hit 34 shots but only scored once. Considering that Ronaldo has been the only reach change to the forward line, it suggests that his finishing is the main factor missing from the team. While none of the players are at Ronaldo’s level, between them they should be able to score far more than they have done, and it very much seems as if they have become over reliant on Ronaldo over the last few years.

The Midfield Are Struggling

Many people have started to say that Casemiro’s ability on the ball leaves a lot of the heavy lifting for his teammates, including the centre-backs, who seem more confident on the ball that he does.

It is widely agreed that Casemiro is one of the best defensive midfielders in the world, but it is arguable that other than breaking up attacks, the rest of his play falls short.

There are other options for the team and perhaps they should be given a chance. For instance, Marcos Llorente was an excellent deep-lying midfielder during his season at Alaves and he has not had much playing time. He has excellent on the ball skills, and he could be a real asset to the team.

There is a Lack of Goal Scorers

This seems to be the main issue and it is a question that a lot of people, including the club’s management, are sure to be asking.

There has been a serious shortage of goals from Real Madrid over the last few weeks, and while some of it is down to bad luck (they have hit the post multiple times in recent matches), it can’t all be attributed to this,

Real Madrid had gone eight hours and one minute with a goal before Marcelo scored against Levante last weekend, a new club record and not an impressive one.

Some people have been looking to Benzema for goals, but in his nine seasons with the team, he has only scored 20+ league goals twice. He had his best season in Zidane’s first year in charge when he scored 24 league goals, a career high, but that was a long time ago. Since then he has suffered numerous injuries, has generally slowed down, and ended last season with a career low of five league goals. Therefore, it seems highly unlikely that he is suddenly going to find the form needed to start scoring every week and end the club’s goal draught.

Another name that has come up is Marco Asensio, who has impressed and frustrated fans in equal amounts. In last year’s Super Cup he scored some fantastic goals against Barcelona, but he has failed to find this kind of form ever since.

In short, there doesn’t seem to be anyone in the team who can be relied upon to consistently score. Of course, Ronaldo is a truly exceptional talent and there are very few players like him, but the team should still be able to improve on its current situation.

The club needs to try to sign some goal scorers as soon as possible, the only question is whether they should wait until the summer for big names to become available, or see what they can get in the January transfer window.

Courtois’ Arrival Seems To Have Disturbed the Team

Thibaut Courtois is certainly a fantastic goalkeeper and his Golden Glove winning performance at the World Cup was excellent. However, his arrival at Real Madrid seems to have disturbed the backline a bit, and the defence are not adjusting as quickly as they should to a new keeper and his demands on them.

Furthermore, it is questionable whether the team actually needed to sign him. So far, he has not looked any more impressive than Keylor Navas and his unsettling effect may outweigh any benefits he does bring. Rather than having made him the big name signing of the summer, they should have instead focused on finding a Ronaldo replacement.

As a new manager, Lopetegui needed to create a cohesive defensive unit where replacements can slot in easily. He has tried to implement a system that involves the defence playing much higher up, but the players seem to be finding it hard to adapt, particularly with the manager changing who plays each week.  This of course leads on to the inevitable point that…

Julen Lopetegui May Not be the Correct Manager 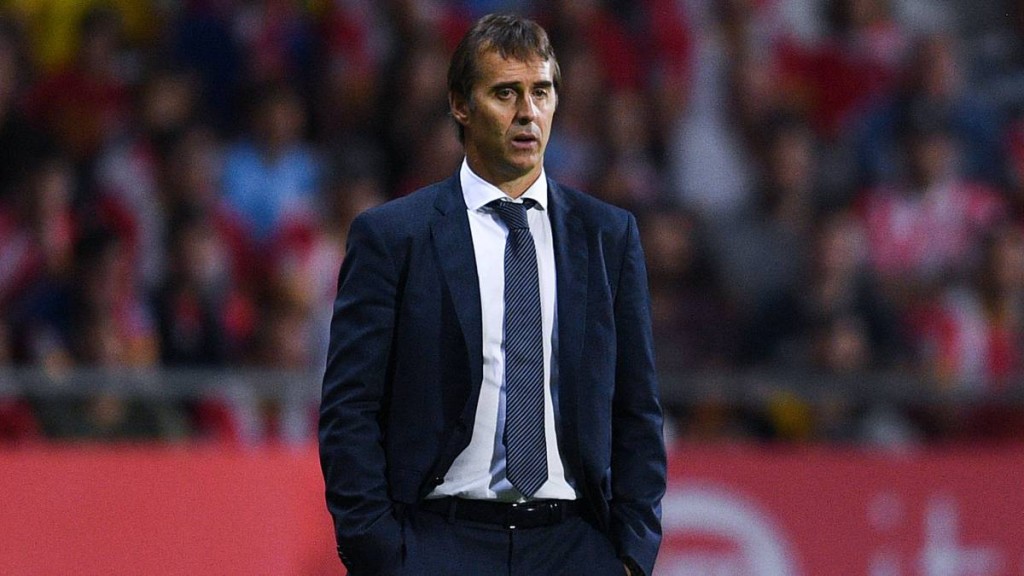 Zidane’s sudden departure came as a true shock to the club and they had to scramble to find a replacement. A number of big names were mentioned, but in the end, two days before the start of the World Cup in Russia, it was announced that the then Spain boss, Lopetegui was taking the job.

This of course had the effect of ruining Spain’s World Cup, and generally, it was considered a badly timed and ill thought out decision.

Now Lopetegui has found himself directly in the firing line and it looks like he has run out of ideas. He has blamed the team’s lack of goals on bad luck, but sometimes his decisions are impossible to understand. For instance, when the team faced Alaves, Isco and Bale were out injured, so why he decided to bench Marco Asensio remains a mystery.

Last week he said, “Coaches are always exposed, but I am not thinking about [the sack].” However, earlier this week reports began to surface that he was set to be sacked and after a number of odd team selections and a seeming inability to change things in-game, many are predicting that his days are numbered, particularly with a Clasico just around the corner.

It seems to be a case of too much change too quickly at Real Madrid. Losing their star player and coach at the same time seems to have unsettled the rest of the team far more than some would have expected. While it is not fair to blame everything on Ronaldo’s departure or on Lopetegui’s arrival, they certainly appear to be a dangerous cocktail.