Thiago Motta has accused the Nice captain Paul Baysse of provoking Paris Saint-Germain players throughout the team’s 3 – 1 defeat over the weekend.

Motta was sent off in the final minute for head-butting Baysse and Angel Di Maria was also given a red card in extra time.

As a result of the defeat PSG are now three points behind Monaco, who have a game in hand, and there are just three league matches left this season. Motta is now guaranteed to miss at least one of them after receiving the red card on Sunday.

Speaking after the game Motta said, “He [Baysse] spent the whole game provoking certain players, putting pressure on the referee too, but you saw that he has nothing [on his face]. He did some great theatre today. We have to congratulate him for that too. I tried to help the referee by calming my players down. We wanted to play football, but boys like him wanted to provoke the PSG players.”

After the game, while Baysse was speaking to the media in the mixed zone, Motta appeared and asked, “How is your face? Is it OK? I hope it [the injury] is not going to last for six months.”

Baysse laughed off the comment and finished his interview while Motta stood behind him for a while before moving on.

Mario Balotelli, the Nice striker who opened the scoring, told his teammates to forget about the victory and focus on the next game. The team are already certain of a top three finish and a Champions League third qualifying round place at the very least. They are just three points behind PSG with the same number of games played.

Balotelli posted on Instagram “Ici, c’est [sic] PAS Paris. Bravo everyone. Now let’s think on the next one. Paris it’s the past.” 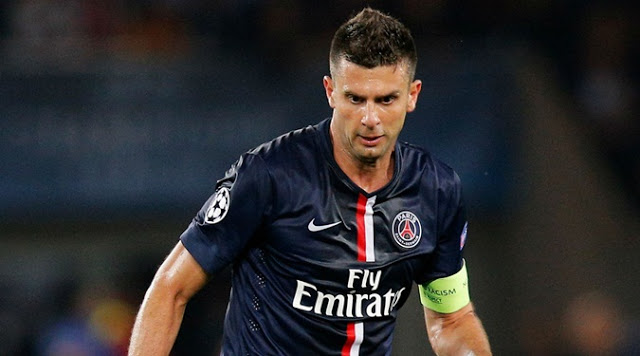