If you are looking to hit a progressive jackpot then Winner Casino is certainly the place for you. We have over €30 million up for grabs from a fantastic variety of games. Whether you like superheroes, stories, treats, or anything else, you are bound to find some progressive games that appeal. Read on to learn about a few of them. 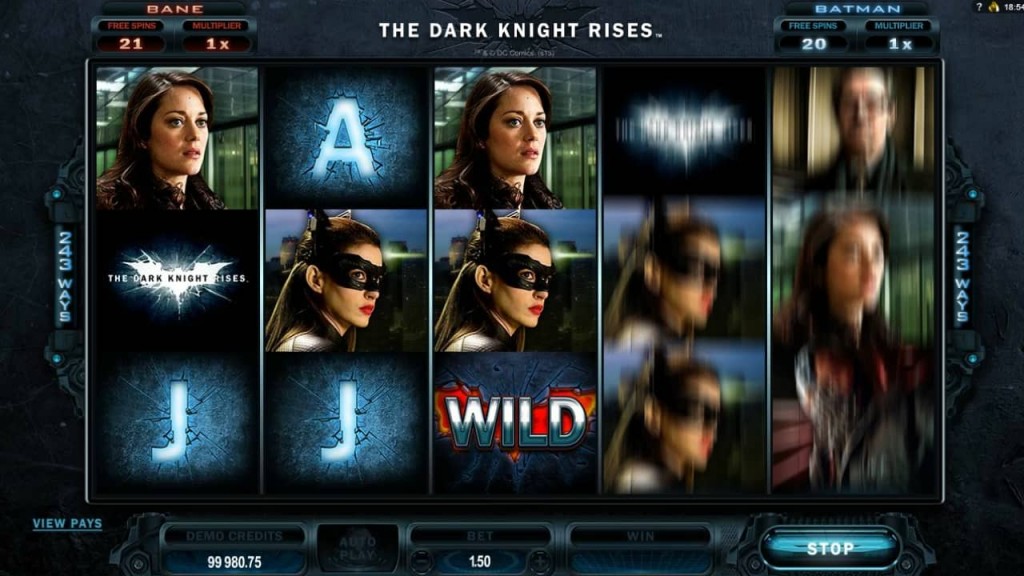 If you are a fan of the Batman films then you are sure to know the 2012 film The Dark Knight Rises. The film is brought to the reels in this exciting slot, and in addition to being packed with bonus features, it is offering a progressive jackpot worth close to €900,000!

The Dark Knight Rises is a 5 reel slot with variable rows and 576 ways to win. Thanks to this structure, in order to win a payout all you need to do is land matching symbols from left to right across the reels starting from the leftmost reel. The reels are set against a menacing view of Gotham City while the high value symbols include Batman, Bane, Jim Gordon, Batpods and Batmobiles. The lower value symbols are the playing cards 9, 10, J, Q, K and A.

The wild symbol is the Batman logo, it can land on reels two, three and four, and it will substitute for all of the other symbols, except for the scatter, to help and form winning combinations. The scatter symbol is a fusion reactor.

Those interested in the progressive jackpot just need to keep the reels spinning. The jackpot game can begin at any time and once it starts, you are guaranteed to win one of the jackpots. The game consists of a grid of twenty icons; you need to click on them to reveal one of four colours. Each colour corresponds to one of the jackpots up for grabs and you win a jackpot by filling up its meter. To win the Mini jackpot you need to find two green icons, the Minor jackpot is won with three blue icons, the Major jackpot is won with four yellow icons and the massive Grand jackpot is won by finding five red icons.

When reels two, three and four are filled with matching stacked symbols then The Fire Rises feature begins. Reels one and five will award you a payout multiplier of 2x, 3x, 4x or 5x, and the two multipliers are multiplied together. Thanks to this, you can win a multiplier of up to 25x!

During the free spins, if the scatter symbol appears on all three middle reels simultaneously then you will be awarded an additional 5 free spins.

The Dark Knight Rises has a betting range of €0.40 up to €20 per spin. In addition to the progressive jackpots, Batman offers the top payout of 1,000x, Bane can payout up to 500x, Jim Gordon can payout 200x, the Batpods can payout 125x, and the Batmobile can payout 100x.

Why not join Batman today and see if he can lead you to the progressive jackpot. 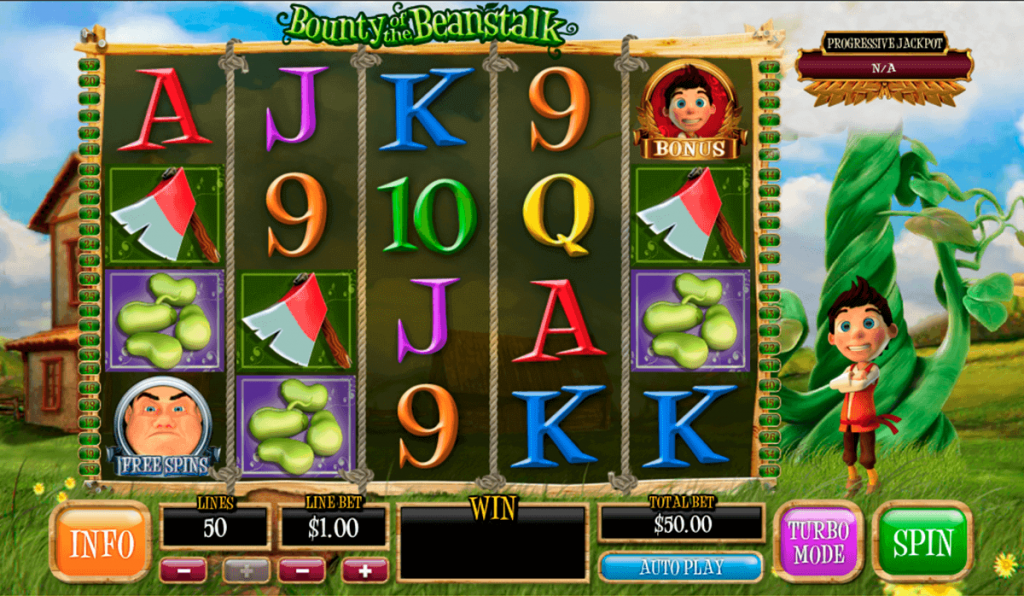 You are most likely familiar with the story of Jack and the Beanstalk in which Jack steals the giant’s treasures. Now you have the chance to steal some treasures of your own playing this exciting slot that is linked to a progressive jackpot worth over €335,000!

Bounty of the Beanstalk is a 5 reel slot with 4 rows and up to 40 paylines. To the right of the reels you can see Jack standing in front of the beanstalk, while in the background you can see a green field and Jack’s home. The high value symbols are all theme related and include Jack’s wife, the cow, an axe, and the magic beans. The lower value symbols are the playing cards 9 through to A.

The Giant’s Treasure Bonus begins when the Jack scatter symbol lands on reels one, three and five at the same time. Jack will then climb up the beanstalk and break into the Giant’s castle. You will see Jack in front of the sleeping Giant and need to select which pieces of treasure he will try to steal. The further away the treasure from Jack, the more valuable it is. With each piece that you steal, there is a danger of waking up the Giant and ending the game. There are also three golden treasures, the Golden Money Bag, the Golden Goose and the Golden Harp, and if you steal them all then the jackpot is yours.

The Giant Free Spins begin when the Giant scatter symbols land on reels one, three and five simultaneously. You will win ten free spins and on any spin the Giant may appear to chase Jack across the reels. As he runs after Jack he can convert up to four symbols into frozen wilds that remain in place for the duration of the spins.

Join Jack as he climbs the beanstalk and with a bit of luck, you’ll come back down with the huge jackpot. 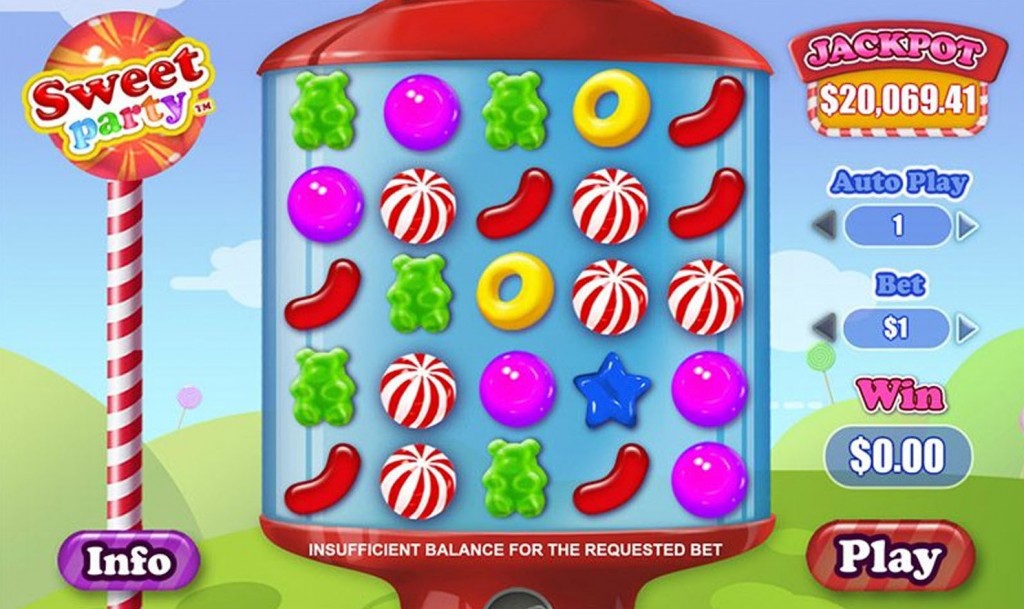 If you have a sweet tooth and are interested in a slot that is a little different, then consider giving Sweet Party a spin. It is an arcade style game and it is giving you the chance to win a progressive jackpot worth €360,000!

The game is designed to look like a vending machine and it is set amongst rolling green hills and some lollypop trees. The action takes place inside the machine on a 5×5 grid of symbols. The game’s symbols are all different sweets and they include red and white striped gobstoppers, green bears, blue stars, purple balls, red jellybeans and a yellow ring.

The slot does not have any wild or scatter symbols and you win payouts by landing groups of matching symbols horizontally and/or vertically in the machine. The more symbols there are in a group, the bigger the payout that you win. You need a group of at least five symbols to win a payout and the largest payouts are won by landing groups of sixteen symbols.

Each time that you land a winning group of sweets, the symbols in it will disappear to allow more to drop from above. With a bit of luck, this will form another winning group and the process will repeat itself. This way, you are able to land numerous wins from just one spin of the reels.

Why not indulge yourself with some sugary snacks and with a bit of luck, you will soon be gobsmacked by a gobstopper progressive win.